But I bet you’ve done or tried at least one network marketing (mlm) before. Probably several. (i have) We – (type A) folks – are driven. We are entrepreneurial minded.

Not perfect. And hence why we’ve tried some things that were “guaranteed” to FAIL. (mlm)

The MLM plan – although on the surface – brilliant. Relies heavily on the folks down your “line”. It’s one thing to rely on a few to run a business as you would. But to expect hundreds to… well – good luck Johnny.

Few – ever really make it – with MLM. The odds are stacked heavily against you from the beginning.

You’ll lose integral 3’s because of whatever.

My neighbor’s chicken is having puppies – so I’m too busy right now.

Others – (even yours truly) – has been known to ride this cycle… 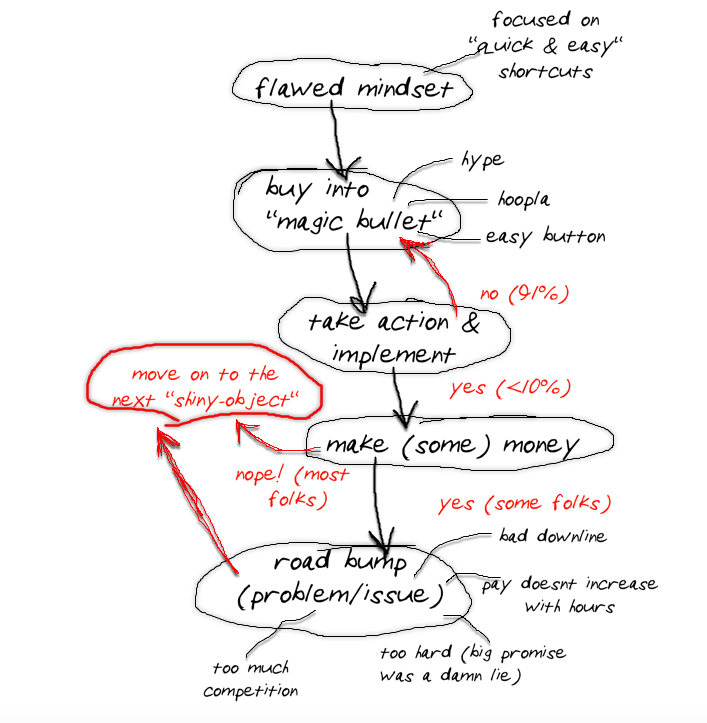 Your driving trucks, washing dishes, doing people’s taxes, building homes or any other number of jobs – and the pay… ain’t that bad.

But you want more.

So Susie, your neighbor’s wife has convinced your wife to come over for hillbilly brunch (tuna casserole from a box, Twinkies cut at an angle with a useless toothpicks stuck in and of course – some real Mountain Dew® – not the Sam’s Choice version).

The pitch is recognizable across a 100 mountain miles.

– we’ve saved $13 on soap this month – here… smell my hands and they’re soft too, probably softer than ever

They attempt to sprinkle in little pitches amongst the already awkward conversation.

– Stan Jr. ripped his tennis shoes the other day and my glue stick is jammed so I used this stuff here (tries to hand you the tube) and I swear on mam-maws grave – they’re better than new.

– Little Miss won’t eat nothing hardly. E-sept for bread. We got these casserole boxes and she just loves them. Makes me feel better as a mom, knowing she’s getting her vitamins.

– And I don’t mean to brag but you see the floor how shiny. Look at my paneling on the walls. See – it’s like brand new. Got this new stuff… all natural and even if the dogs lick it – it’s safe.

– I stand to make a real good bit of money this month just in savings but you can sell this stuff too. I already got 2 people want’n to do it with me – so if you ever wanted some more money…

See really you just need three people under you. I’ve got too many so I’ll put Jessie’s wife under you and then you’ll just need two.

Said fast (you know so it doesn’t sting so bad) –

Fail-proof. Except for the 99.89% that fail. And not for a lack of trying. (refer to diagram above)

The cycle is over.

We all want solutions. We want more money. Sure. I can do more truck driving and hope my wife doesn’t leave as I watch my kids grow up via Skype.

I could put more hours in at the factory. After-all – they just approved more overtime.

I could pick up that part time gig mowing yards with John.

PROBLEM IS… all these are a trade off.

Trading your time for money. Trading dollars for days. Days you won’t get back.

Sure – you can work more. We all can. But at what price?

It’s not your fault.

The path to the American Dream got changed. No longer is it work for a company for 30 years and then if you’re still healthy enough to enjoy it – you can retire with a pension.

Those days are over.

Now – it’s either work hard and hope for the American Dream and eventually find you are the part-time Walmart® greeter.

Facts are – most Americans will work hard. Have little to show for it and one day get to have 2 part-time jobs to supplement their dwindling fixed incomes.

The best years. Well those are over.

Then answer this… I can give you a million dollars right now or when you’re 67. When do you want it?

Now. Of course you said now. Because these are your best days and you’ll be able to work with that money in hopes to make a brighter future later. You’re healthier right now. You’ve got more energy right now – In fact: EVERY THING IS BETTER NOW – than it will be later.

But you’ve made it to this point. This sentence. These words.

And are still here.

So it’s you. That CAN and WILL break the cycle. Not just MLM, but trading days for dollars.

My Course Book – Everything you need to know about getting started, my journey, my secrets

Free Bottled Water to sell for whatever you want!

FREE HELP VIDEOS! I go live on YouTube a lot. And some want to be notified moments before I do. If you do… then get on the list here

How to build your own CART saving a bunch of money!

Killer secret to hijack any Location you want